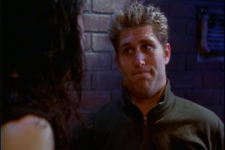 Trouble arises when Chris-R and his group march to San Francisco to deal with Johnny and his friends. Meanwhile, Michelle searches for Mike.

The song continued to play as John kicked his truck door open and fell in the mud. He had accidentally hit a tree. The sun was rising. Several walkers approached him. "Who wants a drink first?!" He started to smash the skulls of the walkers. When they were all dead, he fell again.

In a place unknown, Mike was tied up at that moment. His captor took his blind-fold off. "Hey, fellow human!" Mike said. "Why did you punch me on my pretty face?!"

The woman laughed. It was a weird laugh. "Oh, you idiot. I'm Janet. You probably don't know me by name, but I am the woman you attacked with your girlfriend and the receptionist who punched you in the face. Now, I have arranged a horrible punishment for you."

"Punishment?" Mike asked. Janet laughed again. "Yes, punishment! You will be put in a retirement home!"

When Mike heard this, his eyes widened. "No! Please, have mercy on my soul! I don't want to go to a retirement home! Not at this age! That's worse than death!" Janet continued to laughing, until she almost choked from laughing hysterically like a witch.

Back in San Francisco, Lisa drove back into her neighborhood. Peter, Denny, Mark, and Nigel were tossing the ball around again, only about two feet apart from each other. They noticed Lisa when she stepped out of the car. "Oh hello Lisa," Nigel said, but she had entered the apartment complex in a matter of seconds.

When she entered Johnny's room, he looked up. He had been watching another episode of Baking Bread. "Wow," Johnny said to Lisa when she entered. "Wallace Black is almost as cool as me, with his 'this is not a bread' line." Lisa smiled again. "Johnny, I want to apologize for the things I did. I say we talk it out. I brought some champagne with me."

Back outside, the others were continuing to play. Denny accidentally threw the ball too far. Peter tried to catch it, but tripped. Therefore, he hit his knee against the ground. "Oh, damn, that hurts!" The others approached him. "You okay?" Denny asked.

Suddenly, Jefferson popped out of the bushes. "Someone in need of a doctor's help?" Peter looked confused, and shook his head. "No, not at all! Everything's okay, doc!" Jefferson nodded, and hid into the bushes again. Everyone just looked confused. "Okay," Mark said. "Time for a break."

Mark took out a cigarette and went a bit out. That was when he noticed several bikers riding to their direction. "This can't be good," Mark said to himself. He quickly ran to the others. "Hey, guys! I say we stop for today!" Denny was irritated. "We only played for two hours yet today!" Mark sighed. "I know, but perhaps we can eat ice cream at the other side of town!" To this, Nigel disagreed. "No, pal. I hate ice cream."

By then, it was too late. Chris-R and the others had gotten off their motorcycles. Denny got scared when he noticed who it was. "Chris-R! We meet again," Denny said. "I was going to give you the money! Really! I gave you a pinky promise, and that is sacred! You should've told me-"

Chris-R slammed his fist against Denny's face, causing Denny to fall down. Chris-R pointed a gun at him, while Fat Peter and the other bikers pointed theirs at the others.

"You see, Denny," Chris-R started to explain. "I've already been paid. And my new client paid me really good. I just had a simple task to do. All I had to do, was put a bullet in you and your friends' brains." When Chris-R said this, Mark realized that it had all been Lisa's doing.

Mark was going to aim his gun and shoot Chris-R right in the face. But before he could, Norbert appeared on a rooftop, with Doggie on his shoulder, and his RPG in his hand. "TAKE THIS, CUNTS!" He fired, killing three people in an explosion. A shootout ensured.

In the apartment, Lisa poured the wine into the glasses. Unbeknownst to Johnny, it was of course poisoned. "I forgive you, babe," Johnny said. He didn't take a drink yet.

Back outside, the others were still fighting Chris-R's group. "Don't worry," Fat Peter said to Chris-R. "We still got them heavily outnumbered. They're not going to stand a chance. And besides, it doesn't look like these other fools really know how to use a weapon."

Fat Peter's words had proven true when skinny Peter accidentally shot himself in the leg. "Oh fuck me! Why always me!" Mark looked into the bushes. "Jeff, get him out of here!" Peter begged not to, but Jefferson crawled out of the bushes and dragged Peter away. Peter screamed like a pig.

Lisa got nervous. "L-letter. What letter?"

Johnny laughed again. "I took a quick look at a letter he gave me before I burned it in that fire. You're having sex with Mark, huh?" Lisa got extremely nervous. She knew she had to do something.

Suddenly, Lisa pushed the table over and grabbed a kitchen knife.

Back outside, Mark, Nigel, and Denny were losing hope. While Norbert was still trying to use his RPG that had become useless, everyone pretty much gave up. They were ready to face their end.

A truck suddenly appeared. It rode right for Chris-R's forces. "What in the actual fuck?" Chris-R said. Suddenly, Fat Peter got hit and ridden over. The driver opened the window, so that he could throw a bottle at Chris-R's face. "Hello folks!" John shouted.

Out of the back of the truck appeared several other priests. They all attacked Chris-R's group. "Yeah," Father John said. "These are my friends. They're not so nice to evil bastards!" Chris-R got up and hid into cover. The others fought back.

"Okay," Mark said. "Cover me, Denny. I'm going to make my way to the apartment complex." Denny did so, and Mark got into the complex. He quickly ran up the stairs, a gun in hand, and kicked Johnny's apartment door open. "Surrender yourself, Lisa!"

When he entered, he stumbled upon Lisa and Johnny fighting with pillows. "Oh hi, Mark," Johnny said. He then pulled out a gun himself, aiming it at Mark. "You and Lisa can make out against the wall."

Somewhere in the middle of nowhere. "Here you go, Rose." Janet threw a tied up Mike at the feet of a friend of hers. Rose picked him up. "He deserves to be put in retirement for the rest of time." Rose nodded. "Alright, Janet. Oh, and don't forget to bring apple cake."

Janet watched as Rose drove off. She smiled. That was until she felt a knife pressed against her throat. Michelle stood behind her.

"You better tell me where she's taking him."

It was getting evening. The survivors were cleaning up the mess left from the shotout. Chris-R was trying to crawl away. He had been shot once already. Denny walked over to him, with a big box in hand. "Hey Chris-R, I got your money! Right here in the box. Just catch it." He then dropped the box on Chris-R's head, crushing it. Denny then proceeded to spit.

As Denny left, a looped song was ending in John's truck.

Take me home, down country roads...

SPOILERS BELOW, READ AT YOUR OWN RISK

SPOILERS BELOW, READ AT YOUR OWN RISK

Retrieved from "https://thewalkingdeadfanon.fandom.com/wiki/Conflict_(TUR)?oldid=113640"
Community content is available under CC-BY-SA unless otherwise noted.